How to Play Wordle (for kids too) 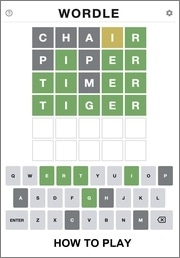 Wordle is a popular online word game. It’s limits you to only playing once per day.  You have six tries to guess the word of the day.  After hearing about it and then giving it a try, many players are quite surprised at how easy it was to do.  This means kids can play as well with great success while using their brains to think of words.

After all, the best educational games online are the ones that help you learn without making you work too hard. Wordle was not designed to stump players in the same way a difficult word game would.  It was created to give people a little fun each day, only for a few minutes.

You can’t overplay the game.  As mentioned, you can only play once a day.  Another thing that makes the game unique is that the everyone playing throughout the world is trying to figure out the same word.  It’s also an excellent way to reduce stress by playing a simple game.

Each daily word is five letters long.  You have six tries to guess it. Each guess reveals which letters are in the word. This new game is played from any web browser and is not to be confused with the Wordle game in the app store.  It’s also called Wordle but is an older different game. 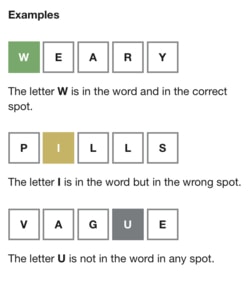 Subsequently, grayed letters eliminated from the word are removed from the letter selection box below the game. This makes it simple to try different letters to attempt new words because there’s no need to need remember which letters belong.  This makes Wordle possible to solve in six tries.

Wordle in the Classroom at School?

Teachers in school are always looking for ways captivate the attention of kids in the classroom.  The rule for cell phones in school is usually for students to put them away during class. But what fun it would be if kids could could our their phones to play the game together.  Students may already be using a tablet, in which case you could play from there.

The idea is to have everyone in the classroom play the game without sharing their progress with others. Some kids will discover the word earlier than others.  The teacher can be available to assist individual students throughout the class as they play.  Students who complete the game can show their teacher they solved the word and put down their phone or tablet until everyone is done the game.

There are many ways to become better at playing word games. This results in kids wanting to play them more.  In turn, they become more educated about words.

How to Play Wordle

Now that you know how letters in the daily word game are revealed and excluded, you are ready to play.  How you start the game is really quite simple.  First, let’s run through the steps of how to win the game.  The link to play is at the bottom of these instructions of how to play Wordle.

Once you have the game pulled up on your screen, you simply need to take a guess.  Enter any five letter word you can think of. Press enter and you will immediately be shown the possible letters in the word, as showed in the image above.  In this example to the left, the word we in a past game showed that none of letters entered were in the word. Those letters are grayed out below so you know to ignore them. 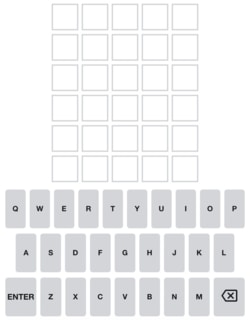 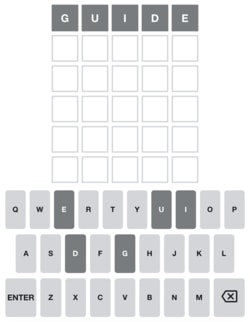 If a word does not exist your guess isn’t wasted.  The game will tell you that the word is not in the Wordle list and you can try again.  As you guess the word in your second try, you now which letters to exclude from your guess.

Here is how this past game was won in four tries. 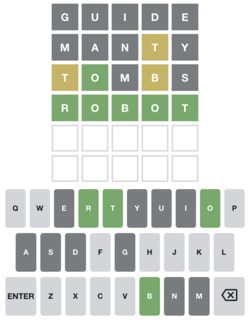 The second guess eliminated additional letters and revealed one letter that was in the word, but not in the correct place.

The third guess showed one word that was in the correct spot and two words that were correct but in the wrong place.

After the process of elimination, the word was guessed.  Remember, if you enter a word that does not exist it will let you know. You won’t waste a turn trying.

So whether you play alone, friends, your family, or your classmates – the game of Wordle is not has difficult as it seems.  Even people who normally don’t like crossword puzzles or word games, such as Sudoku, are enjoying Wordle.  They like it because it only allows you to play once a day. You don’t need to download an app, just use your favorite browser.

It’s a good idea to use the same browser everyday because your browser cookies will show your progress after each game every day.

Now you’re ready to play!  Share this page and spread the joy of Wordle.  Play your first game at https://www.nytimes.com/games/wordle/index.html.

How to Use Instagram as a Teaching and Resource Tool »
« Creating a Recommendation Letter: Guide for Students