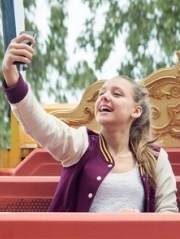 Talking to teens about internet safety can often be frustrating, especially if they pretends to listen, giving one word responses at the right times. For that reason, the first tip for talking to a teenager (about anything) is to make it a routine.

If you truly want to have meaningful two-way conversations on a variety of topics, including the short term and long term concerns of posting pictures online, laying the proper ground work is essential.

It can be weekly, or monthly, or as often as every day after dinner. Families that “enforce” open conversations are more aware of what’s really going on with every family member, and that’s important. Discussions about online safety for kids doesn’t have to (always) center around extremely sensitive, awkward, uncomfortable, or otherwise personal topics. In fact it will feel easier to talk about anything when your family has a routine of open conversation.

Above all else, having an open mind as a parent is crucial. Your teenager must feel comfortable talking to you, without fear of repercussion, or she will only give you the parts that she feels are safe to tell you.

Be Easy to Talk To

It’s frustrating when you try to talk to a teenager who won’t say much to you, but is always texting on their phone. Surely she has something to say… why are they so aloof with you?

Before you go blaming the phone, ask how difficult it might be for your teenage daughter or son to get your undivided attention. Remember that you have a lot on your mind too, so sometimes you might be too distracted and equally difficult to talk to.

Then there is the parenting style you follow. Parents who say “No, because I said so” are less easy to talk to then parents who say “No, because {explanation}.” Although your teenager is still a child in your heart, you are still raising a person who has reached a point of independence that you aren’t happy about. It shows, but there is nothing you can do to keep her a baby forever.

The tough conversations are even tougher with a teenager. Teens know that babies aren’t brought by a stork, and at least one of their peers probably already has one on the way. When having a tough conversation with a teenager, you want to contribute information from a different perspective while also gaining an understanding of where they are coming from.

While being a good listener, you must also understand that this conversation is a million times tougher for your son or daughter to be having with you. Consider how awkward you feel bringing it up, and multiply it by infinity.

The most helpful thing you can do is set the tone to ease their discomfort. Use humor to make them laugh (but not humor that will only make her more uncomfortable!) and your child will be more likely to relax and open up to you.

This might come as a shock to you, but many teenagers can be reckless with the photos they post online. This is particularly true of girls. They want so badly to be seen as mature adults—and as attractive females—that they will share pictures of themselves that are various levels of inappropriate.

Did you know that pictures you share online can be traced to your location, even if you don’t tag it on Facebook? (You can start with that too, maybe even share an article that talks about how location services in smart phone cameras place a stamp that can be used by computer-savvy web users to find out where a person is located.)

The important thing is not to go through your teenagers’ social media page without her permission and comment on pictures belonging to her or her friends. (A teens privacy on Facebook is up to each parent’s discretion and it may be as easy as ‘being friends’ with your kids on Facebook so they know you expect a certain standard of conduct). Raise awareness about various issues regarding social media and plant the seed of a new perspective.

Note- It is perfectly okay to inform your daughter that “duck lips” are terribly ridiculous looking, but a genuine smile is much more beautiful and attractive to boys!

The point is that you aren’t entirely in charge of the conversation and shouldn’t try to stick to one point. Encourage your daughter to participate by asking her opinion on inappropriate pictures (where does see the line drawn?) or finding out what she knows about geotagging.

Rather than taking the cliché paranoid parent approach, talk about posting pictures online as a casual conversation. You’ll get the answers you want, and it will give you both a chance to learn from each other.

Pictures say a thousand words, or so the saying goes. And pictures never lie. However, a picture posted in the wrong context and twist the truth. News stories on television and the Internet are not complete without an image and personal profiles seem empty without a selfie. People trust a picture. But should they?

You can get a better understanding of how editors and website managers pick images by performing a simple experiment.

Take out your phone and turn on the camera. Set it to record a selfie video. Then take a moment, prepare, suck in a breath and record yourself singing the national anthem.

Put your heart into it. Sing with strength and feeling. Then save the video and take a bow.

Now sit down. Pick an emotion: anger, love, envy, shock, happiness, sadness. With the emotion you decided on in mind, watch the video. When you see an image of yourself that matches the emotion you picked, pause the video.

If you were making a post on your social media page about your emotion, you could use that picture to show how you felt. But you know that the picture is simply one note sung from the national anthem.

Again, thinking about your social media page, go through the video, imagining which screen capture you would use as a profile picture. Some images show you with your eyes half-closed. Some show you with your mouth open like a fish.

If you were being mean to yourself, you would post the pictures that make you look like you just woke up.  Using advanced photo shopping software, you can enhance your photos before posting them online.

That happens every day in editorial offices. Public figures like your favorite singers, movie stars and government officials are always being photographed or caught on video.

If an editor wants to show that singer, star or official looking funny or heroic or attractive or strange, all he or she has to do—is pick the right picture.

Like you singing the national anthem, every person in the public eye can be seen with eyes half-closed or looking angry or strange.

Some editors use photo shopping software to make people appear the way the editors want them to look.

Editors of fashion and celebrity magazines are notorious for changing faces, slimming down figures or smoothing rough spots on the celebrities they like.

There are many famous people you probably wouldn’t know if you met them on the street because all of the pictures you’ve seen of them have been changed.

Maybe the photographs don’t lie, but sometimes the people who pick the photos do.

Cell Phones in School »
« CyberBullying: A Word for Kids and Teens