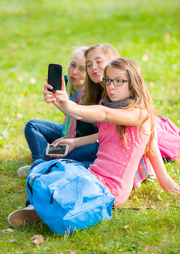 Her alarm goes off – much too early. She was up texting with her girlfriends into the early hours of the morning, stifling her giggles so mom and dad wouldn’t hear. She didn’t want to miss a single confession or inside joke, not to mention the late night activity on Twitter and Snapchat.

There are just as many posts after bedtime as there are during school hours, and she would feel pretty stupid at school if she missed out on something big from the night before. Drama actually happens pretty frequently online and over text when she’s burrowed under the covers with only the light of her cell phone – whether it’s an ugly feud between best friends, a rude meme about someone at school, or a nasty breakup with insults flying.

After snoozing once or twice, finally rolling out of bed at the angry threat of her mother, she stumbles through her morning routine, slowing only to double and triple check her appearance in the mirror.

She needs to look cute enough to be popular and desired by the boys; she can’t break the school’s dress code, and she also can’t look like she’s trying too hard or looking too promiscuous or else she’ll risk being called a slut. She knows what her friends say about other girl’s outfits behind their back.

She splits her attention between her teacher’s lessons and the constant stream of texts and snaps she hides under her desk. When she passes up the worksheets at the end of science class she hears stifled laughter from the punk boys behind her.

They’re always cheating off her papers and getting her in trouble. She looks down at the stack of papers in her hands to see that they also handed up a scrap of paper with a very giant and detailed drawing of private parts. She feels sick but just rolls her eyes at them, crumpling the paper into the trash can down the aisle as she leaves.

On the bus ride home from school she sits next to her next door neighbor, Summer, and they pass the time by showing each other Instagram accounts of cute boys at neighboring schools or connecting apps like Omegle, Twitter, and TikTok. They talk about the ones they know from church or sports groups, the ones they’ve talked to through direct messages or texting, and the ones they follow but don’t actually know at all.

She’s surprised to hear that some of these boys have also asked Summer for intimate photos – she’s had a few of those requests of her own.

“Did you send them?” she asks nervously.

“Well… no. I was too scared.” Summer replies sheepishly.

She feels relief that her friend also turned down the not-so-polite request from these teen boys. She frequently wondered if any of her friends had delivered on the request.

Charging her nearly-dead phone upon getting home, she has an hour or so of uninterrupted homework before a phone-free dinner – her parent’s rule.

“How was your day today sweetie? School good?” her dad asks between mouthfuls of peas.

“It was good. Just a regular day.”

It’s critical to talk to your teen girls – and not just about their homework. Social media has turned their world into something most parents wouldn’t recognize. Talk to your daughter about her friends, which social media apps she uses, boys, drugs, and even the taboo subject of her body.

You won’t regret the extra effort, even if it feels awkward. She needs you, and those conversations, to keep her rooted in a world of confusing values and social media.