What News Should Students Use? 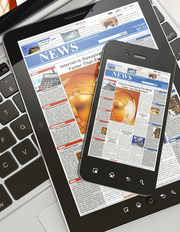 It is important to ‘stay informed’ about what is happening in our local communities and globally. What goes on around us effects our lives and those we care about. Knowledge also equips us to stand up for others that may not have a voice.

A good start to understanding the issues is talking to parents and teachers about current events.  Discussions with friends can also help in broadening our horizons.

In modern democratic societies, NEWS has become a primary source for people to learn about their immediate surroundings and the personal awareness of each individual spreads outward… from our local community – to our neighborhood – to our county, town or city – to our country and the entire world. In the age of the internet where information is immediately available and news is instant, it’s never been more important to decipher fact from fiction and the truth from unfounded rumors.

Before online access to any type information, you’d hear the phrase “you can’t believe everything you read’. Today, the phrase has been more commonly stated as “you can’t believe everything you read on the internet“. There are also human interest stories that are not necessarily breaking news (news that has just happened) but interesting stories that keep people entertained.

It really comes down to getting ‘the facts’ straight. So how does a person know what is true and that which is just someone’s opinion or even worse – unfounded rumors. We have come to trust journalists and news reporters to give us correct information but it is still important to get the right information from reliable sources.

When NEWS happens, the Five W’s need to be answered correctly.

Many will also answer a sixth question.

So it is really the Five W’s and an ‘H. The more complicated the news story is, the greater research needs to be done to get all the information correct. For the journalist, this means it will take more words (and time) to explain the issue. This poses a problem for many news outlets, which we will explain in a moment.

So what are the news sources available for us to gain knowledge about what is happening on a daily basis?

First, let us explore the different types of news ‘geographically’. Then, we will look at the best sources to get information about these various areas.

To gather news that is happening in these various geographical regions, you will need to explore the different news sources available.  For example, to learn about what is happening locally, you will want to seek out a local news source.  This will be a local radio or television station that features local news, or a newspaper publication that is delivered to your door.  On your smart phone, you can download a app for a local newspaper that allows you to set your news to see only stories that are relevant to your town or city.

Local news sources will also feature some information about events happening elsewhere, but it may not be as in depth since their focus is on local news. To hear more about national news, you will need to find a national newscast.  To learn more about the entire world, you may want to download an app from BBC news which is out of the UK but tends to be more globally focused in their news reporting.  The news source you are accessing will determine what type of stories are being delivered to you.

As mentioned, the more in depth a news story is, the more time it will take to explain all the details of Who? What? When? Where? Why? and How?  In this way, some news sources do a better job of it.

Newspapers:  This is often the best way to get your news because newspapers (delivered to your door and sold at the local convenience store) do not have a limit on space to explain the 5 W’s and the H of a story.  This also means you will need to spend more time reading it but the reward is that you will be better informed.

News Apps:  With the internet, there is a growing trend away from physical newspapers. News apps deliver the same news stories as a newspaper, but allows for easy and instant access through an app you download from the app store on your smart phone or tablet. To find local news apps, first learn the name of the local newspaper you want to read and then search for it in the app store. Apps do a good job of categorizing your news, such as local, national, world and specialty topics – such as financial news, sports, entertainment, technology, science, health and more.

Television News: The benefit of television news is that you can learn the basics of a story in just a few minutes. Newscasts will also feature many stories in a brief period of time. The downside is that you need to ask yourself: “Am I hearing the full story”? One thing to keep in mind is that television news is often hyped. This is because ‘bad news’ gets more viewers. Unfortunately, human beings gravitate to watching news that is about bad things happening to other people, or natural disasters.  Those who only watch television news tend to develop a darker picture of the world, when in fact, there are many good things happening in your community and the rest of the world as well.

Radio News:  This is often a good way to get your local and regional news delivered in a short period of time. They also spend a bit more time explaining the issue if the radio station you are listening to is more geared to information and not music. Like TV news, radio does not spend as much time exploring the story being reported.

Talk shows on Radio and TV are good at exploring issues deeper, but many talk shows are editorial in nature. This means that it’s acceptable for the host (editorialists) to share his or her opinion about the issue. Whereas journalists are expected to deliver the straight facts without voicing their opinion.

The Internet:  Similar to downloading a news app, you can go online and search Google for news related to a topic or bookmarking a website such as Google News and visiting it regularly. Like a newspaper, the news delivered on these sites is in print form and can offer an in depth view of your country and the world. Especially when reading news online, you need to be careful of fake news.

As you can see, there are many different types of news and a variety of ways to stay informed. So what is the best news that students should use? The simple answer is to not get your news from only one source. More importantly, to fully learn the facts about an issue or an event, a good place to start is understanding that the less time a news sources has to report the news to you, the less you will be informed.  Reading the news from a variety of sources is still the best way to be fully informed.

The world is buzzing with false media. Trolls are being investigated by police in the U.S., New Zealand, South Africa, Germany, Canada—in fact pretty much any country that has social media platforms. Britain has seen a wide variety of “missing kids” posts that receive lots of re-tweets and posts but turn out to be false.

The stress, panic and damage such posts cause to families and individuals can even be handled as a criminal matter. Why do people post false news?

Think about yourself. Suppose that you see two friends walking down the street. One girl–say, Linda–suddenly waves to a car that swerves over to let her in before swerving and speeding away. Later you hear that Linda didn’t show up at an after-school group. Nor has she posted anything on social media for hours. You start texting with a friend and after a few minutes you start to think Linda may have been kidnapped. You upload a post describing the last time you saw Linda and for a headline you type: Was Linda Kidnapped?

The headline is so striking, everyone clicks on it to read about Linda. Everybody who knows Linda shares the story and likes your post. You’ve never had so many hits on your page.

Studies have shown that likes and shares are the main reasons people post false or misleading news—they enjoy seeing the numbers climb higher than they’ve ever had before.

Meanwhile, Linda’s parents are freaking out. They try to call Linda and find her cell isn’t on. Only later, after frantic calls to the police who start a search and show up at your home to interview you, does Linda call home—she’d been at a swimming hole with her cousin and for three hours and didn’t have cell service.

This little story isn’t that far-fetched. People of all ages—not just kids—post stories not because they are true, but because the grim details get likes and shares. Major news sources do it because when more people click on their stories they can charge more for advertising. People do it to get more attention on social media.

How does this matter to you?

More personally, if you are caught posting fake news, you will never be viewed as a real source ever again. People will read what you say and down-vote it. If you’ve been linked to false news, people will not believe what you post.

In these days of false news, multi-million dollar news outlets, from newspapers to globally-televised broadcast stations to top-rated website, all suffer when they report stories that fudge or play with facts. Don’t let that happen to you.