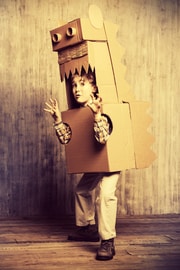 For centuries, the Goolarabooloo — a group of aboriginal people living on the northern coast of Australia — honored a very strange place.  The ground there had deep impressions in the rock that the Goolarabooloo described as a place where spirits walked.

Only when dinosaur experts examined the land did the world discover that the imprints were the tracks of dinosaurs who walked the earth hundreds of millions of years ago.

The footprints are partially covered by tides and the dinosaur scholars have to watch out for sharks and crocodiles when they try to study them. Most of the footprints are smaller than your hand but in March, 2017, the experts found one that excited the world: it is the largest dinosaur footprint ever discovered.

There are many of these massive imprints, frozen in time 115 million years ago, but the largest is five feet and six inches long—or 1.7 meters. This print is large enough for a man to lie down in. The creatures who left these impressive prints are from the dinosaur group called sauropods, the largest creatures ever to walk the planet.

Sauropods typically have very long, thin necks and long tails that tapper off at the end, with a gigantic boy in between. These massive dinosaurs were herbivores, living off vegetation, unlike their carnivorous relatives who ate other dinosaurs.

A large sauropod would be about the size of a 737 airplane.

The sauropod group includes the Brontosaurus, Brachiosaurus and Apatosaurus, all creatures that would have made elephants wee. A good sized sauropod would make even a Tyrannosaurus Rex look puny.

The discovery on these huge footprints spread from the north shores of Australia to people all over the world. Before this find, the largest dinosaur track was found in the Gobi Desert in Mongolia.

It, too, came from a sauropod—probably a Titanosaur—and measured 42 inches, or 106 centimeters. That was only a year before the discovery in Australia. As long as humans keep exploring and searching, even bigger footprints might be found for years to come.

The Goolarabooloo believe that those grand impressions are the marks of great spirits. People who love dinosaurs think that the Goolarabooloo might be on the “right track.”