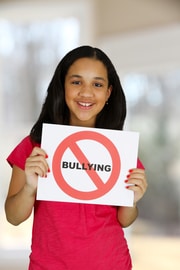 Anti-Bullying Day is a day when the world joins together to stand up against bullying in our schools, on the playground, and online on social media. It’s recognized at different times of the year depending on what country you live in. These are special days that bring awareness and focus to help stop bullying, as well as standing up for those who are currently being bullied.

Parents, teachers and kids of all ages can all work together to ensure no one is ever bullied. Kids can do their part by being a friend to those who are victims of bullying and including them in activities with their group of friends. Even the simple act of sitting with someone in the lunchroom can go a long way to help them feel like they are not alone.

The Origins of Anti-Bullying Day

The idea of Anti-Bullying Day began in Canada in 2007. It’s also called Pink Shirt Day in Canada and takes place on the last Wednesday of February. It began when people came to the defense of a boy who was bullied simply because he wore a pink shirt to school. This is why there is also another day called International Day of Pink, which is held the first week of April.

Countries such as the United States, the United Kingdom, France and New Zealand will honor “International STAND UP to Bullying Day” on February 28th or 29th. Schools may call the day by different names, but the goal is always the same; to stop bullying and help those who are currently being bullied.

The United nations declared every May 4th as International Anti-Bullying Day. Regardless of when any country commemorates this important day, it’s vital for all of us to speak out against bullying. It’s a reminder to stand along side those who are bullied – regardless of their age, race or gender.

Bullying has been around since there have been schools, or when any group of friends throughout history have gathered together to play. It only takes one person who feels the need to ‘get their kicks’ out of picking on someone in the group. The invention of the Internet has rapidly spread the problem. Bullies now have the ability reach their victims at home through social media. This is called Cyber Bullying. On the Internet, the effects of bullying can cause even more hurt and damage and do it much more quickly.

Things You Can Do to Stop Bullying

No matter where bullying takes place, on the playground or online, it’s important for kids to also stand up against it.   If you know of someone who is being bullied, tell let your parents, a teacher or school counselor. There are also other things you can personally do to help. As mentioned, sometimes helping means just being a friend to someone who doesn’t have one.

On social media you can stand up for someone by speaking out against harmful comments about another person. It may be by making simple comment in defense of someone. If you see one of your friend connections taking part in bullying, you may want to talk to them about what they are doing. Ending your social media connection with a person who is bullying you or others is also be a very healthy thing to do.

If you being bullying, the first step is to tell an adult you trust. They can guide you in what you can do to help it stop. Sometimes bullying can happen within friendships. If you have a friend who are being cruel to you, this is called a toxic friendship and a toxic relationship. Distance yourself from them. They are not a true friend who cares about you.

You’ve probably heard the term used for people who are watching something happen but are not part of the action. They are called bystanders. If you were walking down the street and an old lady drops her groceries, and you do nothing to help her, you may be called a bystander in a negative way.

How Will You Make a Difference on Anti-Bullying Day?

So, whether your school asks teachers and students to wear pink on your own Anti-Bullying Day or not, it’s important to remember that everyone can make a difference. Remember, a large group of people saying NO to bullying is made up of individuals. If everyone said they can’t make a difference just because they are only one person, many great causes around the world would lose their power. That’s often be referred to as “The Power of One”.

Do you see someone who needs a friend?

Do know of someone who is being bullied?

Maybe you are the one who being bullied.

Talk to someone about how you can stand up for yourself in a safe way, or do something else to prevent it from happening again. Don’t be afraid to block or hide someone from view on social media. You may even decide that a particular social media platform is not for you and delete your account altogether. Talk to your parents about this if you need help.

It’s also ok to have compassion for the bully. They are human too. Why do they do what they do? Which brings us to our final comments on the subject of bullying.

A Final Word for Bullies.

Are you a person who is bullying someone else?

You may wonder why it makes you feel better to be hurtful to others. Perhaps you are involved in other destructive behavior. Maybe you are being bullied or hurt by an adult. Teachers and school counselors are there for you too. Talk to them.