The Dangers of Texting and Walking 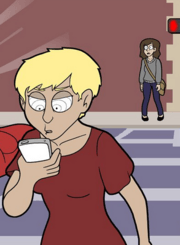 Zombies are invading the world!  Yes! There is a worldwide outbreak—of zombies. Germans calls these shuffling, bent creatures “Smombies,” a word made by joining two words: zombie and smartphones. Smombies are the people you see walking around with their eyes on their smartphones and not on the road ahead.

Each year, hordes of people are hurt by bumping into objects, falling into pools and getting hit by bikes and vehicles.

Innocent drivers who can’t avoid these zombies suffer from the trauma of hurting others. Older and disabled people walking down the street don’t move fast enough to avoid zombies and are commonly bumped and injured.

And this isn’t just taking place in your neighborhood. Zombies are a problem around the world.

In Seoul, South Korea, the city’s transportation department put up signs that show people using smartphones walking into cars. The signs are meant to remind people how dangerous walking can be when they don’t pay attention. The problem is that people must look up from their smartphones to see the signs.

Germany officials put bright strips of LED lights right in the sidewalk. This was done to keep people from walking into city trains. These lights have also been used in sidewalks in the Netherlands. Many people don’t like this idea, because it makes zombies feel that they don’t have to pay attention to the world around them.

In Austria, officials put airbags around lampposts to keep zombie tourists from smashing into them as they walk through the streets looking at their phones.

The city of Chongqing in southwest China has tried to solve this problem by making two walking lanes. One is for people who are not using smartphones as they walk. The other is for people walking with their heads down.

Honolulu, Hawaii, has passed a law making it illegal to enter a crosswalk while you are looking at your smartphone. People who step out into traffic with their eyes on their phone face huge fines.

Because of all the traffic accidents caused by zombies with their phones, Brazil has older ladies helping young smartphone addicts cross the street safely.

All around the world, zombies—or smombies, if you prefer–put themselves and other people in danger. You can help stop the invasion. The same goes for kids playing Pokémon GO outdoors and not watching where they are walking.  Remember this: a smartphone weighs about 4 ounces. A car can weigh about 80,000 ounces. When they hit each other, who do you think will win?

5 Things Your Child Can Learn Online »
« Anger Management for Kids (When You Get Mad!)