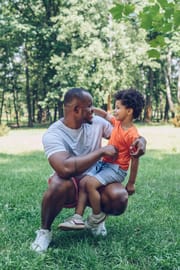 Parents’ influences on children’s development have long piqued the curiosity of developmental psychologists. Finding true cause-and-effect correlations between individual parental acts and children’s later conduct, on the other hand, is extremely challenging.

Some youngsters raised in vastly different surroundings can develop astonishingly similar personalities later in life. On the other hand, Children who share a house and are reared in the same environment can create different personalities as adults.

Also, today’s digital world has changed the way of parenting to a huge extent. Lots of parents have improvised their parenting by using various parental control apps that are used to track and monitor online activities of children. It is also used to track social media activities, monitor Snapchat, Facebook, WhatsApp, Viber,etc.

Despite these obstacles, academics have proposed that parenting styles and their consequences on children are linked, and some researchers believe these effects persist until adulthood. This article dives into how parenting affects child development in depth with types of parenting and their effect on child development.

Diana Baumrind, a psychologist, researched over 100 preschool-aged children in the 1960s. She found certain key aspects of parenting through naturalistic observation, parental interviews, and other study approaches.

Discipline tactics, warmth and nurturing, communication styles, and maturity and control expectations are among these factors. Baumrind proposed that most parents have one of three parenting styles based on these dimensions.

Maccoby and Martin’s later studies proposed introducing a fourth parenting style. Each of these has a different impact on the behavior of children. By studying the types of parenting styles we can know How parenting affects child development at various levels.

Children are expected to follow the rigorous restrictions established by the parents under this parenting style. Failure to observe such guidelines is frequently met with retaliation. Authoritarian parents never explain the reasons for these rules. If pressed, the parent may respond, “Because I said so.”

Many parents are not very sensitive to their children despite their great expectations. They want their children to behave admirably and avoid making mistakes, but they give very little guidance on what they should do or avoid in the future. Mistakes are punished, often harshly, but their progeny are frequently left wondering what went wrong.

These parents, according to Baumrind, are “obedience- and status-oriented, and want their directives to be followed without question.” They are frequently labeled as autocratic and overbearing. “Spare the rod, pamper the child” is their philosophy. Children are expected to obey without inquiry.

An authoritative parenting style, like authoritarian parenting, establishes rules and principles for their children to follow. This parenting method, on the other hand, is far more democratic.

Authoritative parents respond to their children’s queries and are willing to listen to them. These parents have high expectations for their children, but they treat them with kindness, provide feedback, and provide enough support. When their children do not reach their parents’ standards, they are more loving and forgiving than harsh.

According to Baumrind, these parents “Parents should keep an eye on their children’s behavior and instill clear expectations. They are aggressive, but not overbearing or confining. Rather than being punitive, their disciplinary tactics are supportive. They want their children to be aggressive and socially responsible, as well as self-controlled and cooperative.”

Children of authoritative parents benefit from expectation and support in developing abilities like independence, self-control, and self-regulation.

Permissive parents, often known as indulgent parents, place few restrictions on their children. Because they have low expectations of maturity and self-control, these parents rarely reprimand their children.

Permissive parents, according to Baumrind, “They’re more accommodating than demanding. They are unconventional and lenient, requiring no adult behavior, allowing for a lot of self-control, and avoiding confrontation.”

Permissive parents are often loving and communicative with their children, and they frequently assume the role of a friend rather than a parent.

The Impact of Parenting Styles

What impact do various parenting methods have on children’s growth and development? Researchers have done a variety of studies on the effects of parenting styles on children and Baumrind’s first study of 100 preschool children. The following are some of the findings:

Authoritative Parenting Has Its Benefits

Children are more likely to follow their parents’ directions if viewed as sensible, fair, and just. Furthermore, because these parents supply both rules and justifications, their children are much more likely to internalize the lessons. The authoritative parenting style can shed some light on How parenting affects child development as well.

Rather than just following the rules out of fear of punishment (as with authoritarian parents), authoritative children can know why the rules exist, realize that they are fair and appropriate, and attempt to follow them to satisfy their own internalized sense of right and wrong.

Individual parents’ parenting styles also mix to form a unique blend in each family. For example, the mother may have an authoritative demeanor, but the father may have a more lenient behavior.

This can occasionally result in a jumble of signals. Parents must learn to collaborate and mix their different parenting styles to establish a unified parenting strategy.

Correlational research is useful for detecting links between variables but cannot demonstrate conclusive cause-and-effect relationships, and is used to link parenting methods with behavior. While there is evidence that a certain parenting style is connected to a particular pattern of behavior, other essential factors such as a child’s temperament can also play a significant impact.

There’s also evidence that a child’s conduct affects parenting techniques. According to a study released in 2006, parents of children who demonstrated challenging behavior began to lose parental control over time.

These findings show that children misbehave not because their parents were overly permissive, but because parents of difficult or violent children gave up trying to govern their children.

The researchers also pointed out that the links between parenting styles and behaviors aren’t always strong.  Many times, the expected child outcomes do not occur; authoritarian parents have children who are disobedient or participate in delinquent behavior, whereas permissive parents have children who are self-assured and academically successful.

Parenting practices and child outcomes are influenced by cultural influences as well. In his book Essentials of Psychology, author Douglas Bernstein argues, “There is no universally “optimal” way of parenting.” Authoritative parenting, which has been connected to positive results in European American households, is not associated with improved school performance in African American or Asian American children.”

Read what is lawnmower parenting and why is it so detrimental to children.

Parents don’t always fall into one of these categories, so don’t be discouraged if you have periods or regions where you’re more permissive and times when you’re more authoritative. It’s difficult to maintain consistency while juggling life and parenthood. Don’t feel guilty or ashamed as a parent. That isn’t helpful.

You can keep a pleasant relationship with your child while still healthily establishing your authority if you are dedicated and committed to being the best parent you can be. Your youngster will profit from your assertive manner in the long run.