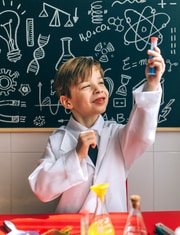 It’s not uncommon for parents is to be curious about how smart and creative their kids are. Of course, there are many IQ tests you can take that provide instant results to measure your IQ score, but remember that measuring kids’ IQ is a bit sensitive.

As the test’s result can impact their feeling and their future, you have to be more careful about it. It’s good to know some details before taking the tests.

Here are all you need to know about kids’ IQ scores and tests.

Testing revealed that as youngsters grew older, the difference between their mental and chronological ages expanded. The intelligence quotient was devised in 1912 by German psychologist William Stern to correlate with the gap (IQ).

The intelligence quotient is calculated by dividing the chronological age by 100 times the mental age (MA) (CA).

What does IQ measure?

Seeing the meaningful link between visual items and applying that knowledge utilizing the notion of fluid reasoning.

Demonstrating attention and focus, as well as the ability to keep information in mind and work with it; comprises one visual and one aural subtest.

Visual scanning and object identification speed and accuracy, short-term memory, and visual-motor coordination are all factors in processing speed.

For children aged 6 to 16, the WISC-V is regarded as the “gold standard” IQ test. As a result, it is a vital part of any psycho-educational assessment. It is usually given since it gives a clear picture of a kid’s strengths and shortcomings, as well as reasonable expectations for his or her performance: a youngster with average potential may expect to work in the average range.

It’s a popular misconception that the “IQ,” which refers to the Full-Scale IQ, is an essential aspect of an intelligence exam.

You must evaluate not just the Full-Scale number but also the consistency of the scales. Here’s a checklist:

Where to measure your kid’s IQ

You and your child can both take a variety of IQ tests, some of which are available online. The good thing is that many of them are completely free, so you won’t have to worry about money.

For your children, here are some of the greatest free online IQ tests:

IQ Exam is a free online exam that is one of the most accurate in the world. IQ Exam is tougher than other IQ tests since it needs you to answer 30 questions.

The exams were created and utilized in academic research, so they can reliably assess your cognitive abilities.

Although the test may appear tough to children, they have attempted to make it as convenient as possible for all participants.

You are not charged for taking this scientific IQ test as many times as you like.

One of the most crucial aspects of this test is that it has no time restriction. They don’t want to put any pressure on you since it can impact your performance.

There are no restrictions, and you or your children of any age can readily engage in this exam.

Free IQTest is a basic online exam that is appropriate for children. There is no need to subscribe, and the results will be available shortly after you complete the exam.

They also include an HTML code for displaying your IQ score on your blog or CV, as well as your grade, categorization, and exam time.

The exam consists of 20 questions that are based on the WAIS formula. In this test, time is of importance, and your scores will reflect that.

Of course, you should not allow your child to become anxious in order to achieve the greatest potential result. The exam is completely anonymous, and you may take it as many times as you like.

123test is self-contained, and our tests are available to you. There is no need to create an account, and you may take exams entirely anonymously.

Every year, almost 30 million people throughout the world utilize 123test. They employ around 140 different assessments in five different languages.

They suggest that if you want a complete assessment of your child’s intelligence, have an IQ test for children administered by a qualified psychologist or educationalist in cooperation with the child’s school.

When you, as parents, want your child’s intelligence tested, it’s usually because your kid looks to have extremely low or extremely high intelligence. Regular school examinations and progress tests will likely serve in all other circumstances. Because an IQ test for children is only required in exceptional circumstances, the stakes for those concerned are higher. Is the kid in need of special education? Is the kid very brilliant, requiring remedial instruction? This sort of discovery can have far-reaching implications.

Regardless of a child’s IQ score, here are some free learning apps that can help them develop critical thinking.