The History of Halloween for Students 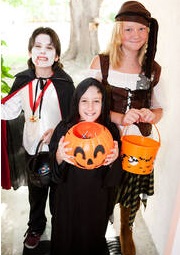 Halloween, a contraction of All Hallows’ Eve, is an annual holiday celebrated on October 31 every year. This popular festival dates back to the ancient Celtic festival of Samhain. But now it’s observed all over the world. Halloween activities include parties, carving jack-o-lanterns, donning costumes and spooky treats.

Children wearing costumes go house to house after dark, calling out at each door “trick or treat”! Then people give them ‘treats’ like candy or gifts.  Among the fun facts, you may be wondering about the history of Halloween and how it pops into the culture through the ages.

Let’s reveal the facts of origin of Halloween.

Halloween is believed to be tracked by the dogma and practices of Christianity. The root word of Halloween derives from All Hallows’ Eve which is the commingled Scottish word of “All Hallows” meaning “to make holy” and “Even,” or “E’en,” meaning evening.

Thus Halloween (31st October) means the evening before All Saints Day on November 1, and the two days earlier All Souls Day on November 2. These three days are called Allhallowtide together.

At this triple-day festival, Western Christians like the Roman Catholic and a large number of Protestant denominations of Christianity commemorate the saints as well as pray for the recently departed souls and martyrs.

Halloween is basically preparing themselves for All Saints Day on the evening of October 31 on Halloween with prayer vigils with other honorary events. After harvest, when there is plentiful food, the Halloween festival becomes more celebratory too.

On the other hand, Historians say that Halloween or Hallowe’en originated from Celt culture as early as AD 270. But my opinion is today’s Halloween has both Celt and Christian influences. To understand the fact read out the history.

The Celts lived almost 2000 years ago in different locations of the world that now lie in the United Kingdom, northern France, and Ireland mostly. Ancient Celts of Ireland arranged the annual feast of ‘Samhain’ a special costume party on 31st October.

They believed that between summer and winter, there is a boundary night when the limit between the living people and the dead is blurred. They also thought that the deceased ghosts came back to the earth on October 31, which was the last day of the year as Celts observed November 1 as their new year.

A fallacy is that evil spirits are released on 31st October in the world to attract the festival and ‘eve’ returns to ward off the demons. Thus, people wore costumes on Halloween to disguise themselves so evil spirits can’t harm them.

According to Christian history of Halloween, a group of missionaries came to the Celt in England and Ireland. After hearing Gospel, most people of Celt accepted Christianity. After that Celt added Gospel with the All Hallows Eve festival.

According to a study by National Geographic Channel, Catholic churches were influenced by Celts Samhain. Thus, the Vatican sanctioned November 1 as a holiday and designated the day as All Saints Day to honor martyrs (saints) and departed souls.

And afterward, October 31 and November 2 were announced as All Hallows’ Eve (Halloween) and All Souls Day respectively. Generations passed by and Halloween transformed into today’s rituals.

How the rituals of Halloween are changing over the years?

Celtic celebrated the festival of Samhain on October 31 where they lit bonfires and dressed in costumes so ghosts can’t recognize and harm them. But how did it come into America?

The rituals of Halloween were brought to the United States by some Irish immigrants in the 1840s for fleeing a potato famine. Thus, it got popularity first among the farm communities. They gathered together at the season’s end and used different natural elements as costumes.

Let’s talk about some Halloween rituals that are changing rapidly.

In the last centuries, there were lots of pranks integrated with Halloween. Stealing garden gates and throwing cabbages are the two most popular among them. But now the style of Halloween pranks is changed. Hanging toilet paper in tree branches or egging houses are now popular.

Between the 1930s to 1950s, most Halloween parties were held at homes rather than parties in downtown centers. But now Halloween parties are very common even in school classrooms.   Celebrations have especially increased due to the involvement of mass people.

What children expect now in trick-or-treating, is candy, right? But before the 1970s, children get nuts, fruits, popcorn, ball, or money. In the past, parents and senior citizens were very much concerned about children’s health.

Halloween costumes are changing every year. According to the National Retail Foundation report of 2019, superheroes were the most popular children’s costumes for Halloween over princesses.

But this changed in 2021, Foundation was the most desired children’s costume to be superman, whereas princess and witch positioned runners up and third place respectively. Fake blood is now also a trending costume option.

To spread Halloween popularity, most TV broadcasts Halloween-themed special programs. “It’s the Great Pumpkin, Charlie Brown” launched in 1966 and that was a beginning of a trend. Afterward, as a continuation of the “Halloweentown”, “The Simpsons”, and “Hocus Pocus” were developed.

On the other hand, seasonal theme parks decorate the parks with Halloween themes and arrange special attractions and facilities during this time to attract people that are really a good initiative.

Where is Halloween celebrated?

Nowadays, Halloween is celebrated around the world but it’s most popular in the United States, Canada, and United Kingdom. In some countries, it’s gaining popularity such as Australia, Belgium, Greece, France, New Zealand, Italy, Singapore, Japan, South Kore, Malaysia, and many more.

And Halloween is observed alongside traditional holidays in many other countries like Brazil, Germany, Ireland (alongside Samhain), Philippines, Columbia, China, Netherlands, and so on.

Halloween originated from the Celt Samhain festival. Celts celebrated the event in the memorial of their dead relatives and to thanksgiving between the end of summer and the long dark winter. Influenced by Celts, Halloween is observed on 31 October every year around the world either as a religious or non-religious event.

Just How Good are Family Pets for Kids? »
« The Parent’s Guide To Navigating Twitch.TV